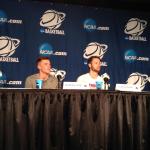 After moving up in the basketball world to the Atlantic 10, Davidson might have expected more respect from their opponents than they got when Iowa junior Jarrod Uthoff said he’d never heard of the school. But you can bet that Iowa will be well aware of the threat Davidson poses after the slew of round-one upsets coming from the non-power-conference schools and from the relationship the coaches share.

As far back as 1975, A Bob McKillop coached team at Holy Trinity High School played against Iowa coach Fran McCaffery for La Salle College High School, the team’s star player. Since then, the two have shared the court many times as coaches, with McCaffery leading UNC-Greensboro for many years in the Southern Conference. McKillop said, “he presents problems because in many ways he does a lot of the things that we do. He runs a motion offense, he runs a fast-paced attacking offense, and he’s got great size and length and versatility to do it.”

The immediate concern for Davidson against the Hawkeyes is the staggering size differential. Iowa’s starting lineup goes 6’2″, 6’6″, 6’9″, 6’9″ and 7’1″. Plus, they have the Big 10’s 6th man of the year in 6’11” senior Gabriel Olaseni. By comparison Davidson starts one player over 6’4″. If Bob McKillop elects to go man-to-man as he’s done most of the year, one can assume Iowa will look to post up any of its frontcourt players.

For Davidson, defending the bigs without fouling will be the key to the game. The Wildcats have dealt with size relatively well this year, with some notable exceptions. In an early November matchup with UNC, one of the biggest teams in the country, freshman big man Peyton Aldridge scored 25 points, but the Tar Heels grabbed 18 offensive rebounds and their length really bothered Davidson’s shooters. It wasn’t necessarily that the Wildcats couldn’t drive against the big men, but instead it was the length of the guards that didn’t allow Brian Sullivan and Tyler Kalinoski to get any good looks and find a rhythm.

That was something Iowa star forward Aaron White spoke about in today’s press-conference. “Obiously Davidson, their strength is their three-point shooting basically from all five spots on the floor,” White said. “It will be a big thing for us to run them off the line, use our length to our advantage and contain them that way. If we run them off the line, force them to our help, I think we’ll be okay.”

White, who played in an all-star game with Brian Sullivan in high school and also played for Coach McKillop for Team USA in Russia, will be a key player to stop. He is Iowa’s leading scorer and is at the forefront of their motion offense. He might not be a household name among Davidson fans, but he has been a great player in the Big 10 for a while. Jordan Barham likely will be tasked with defending him.

As the season progressed, Jordan Barham took on a different role defensively, stepping into the four position defensively in many games. For a 6’4″ player, the way he has defended the post has been remarkable considering he’d been defending the two and three almost exclusively before. In his last eight games, he’s had seven or more rebounds in all but one. But he’s also stayed on the court more so than Davidson’s other bigs have. Aldridge and Nathan Ekwu, the two freshmen, both have struggled with fouls at times. And one thing Davidson doesn’t have is depth in the frontcourt.

Davidson might have to use their “big” lineup a little more than they normally do against the Hawkeyes. Oskar Michelsen will be called upon for big minutes, and if he’s able to keep defenders honest with an early three or two, his presence could be huge. Andrew McAuliffe too will play a crucial part in this game. The sophomore rarely stands out on the stat sheet, but his development this year cannot be understated. While he doesn’t grab many rebounds, his positioning on the block defensively and his box-outs have allowed Barham and the gurads to come in for the boards.

Iowa hasn’t faced a team quite like Davidson though. They haven’t had to defend an offense with so many shooters. And when they have played teams with big men who can shoot, they have struggled. Aldridge’s stroke has gone quiet in recent weeks, but if he can get back to what he was doing in late January and early February offensively, he can cause some issues and open up the paint for drives and backcuts.

Sullivan and Kalinoski too will need to be on the game shooting wise, as Davidson will need to at least match their typical production from deep to be in this game. With their experience, they will need to be the ones that must not be fazed by the stage. As Atlantic 10 Player of the Year, Kalinoski will be the focus of Iowa’s defensive gameplan. But his versatility and ability both to shoot from deep and put the ball on the floor should force the Hawkeyes to stay honest, giving him the extra step necessary to get good shots off.

“For us, the key is just to continually move,” Sullivan said, “We have rules to our offense, [the key to getting good shots] is just to follow them, to help people out, to screen, to finish our cuts, really just to keep the floor spaced, continue to be unselfish as I think we have been all year, and just honestly keep the attack and the pressure on them.”

In their open practice this evening, the Wildcats looked focused. Unlike many teams all day, Coach Bob was not messing around with this practice. I’m not sure Louisville players broke a sweat in theirs, but the Wildcats were on the run all practice, getting shots up and working with a high level of intensity. These guys are ready.

I’ll be on the scene all day, so follow me on Twitter (@Klaus_Faust) for pregame thoughts and updates.

What do you think? Cancel reply